“Out of the blue, into the tree,” is the Hindi equivalent of: “Out of the frying pan, into the fire.” That is exactly what happened to me (the Hindi one) when I parachuted through the clear blue Goa sky on a fine January day in 1986.

It was a skydiving demonstration as a part of the Silver Jubilee Celebrations of the Liberation of Goa. I was in charge and leading a team of skydivers. The forecast winds were way beyond the performance characteristics of the parachute we were using, and the capabilities of the jumpers, to counter. Prudence demanded that I called off the demonstration jump. But then, the thought that organisers and the spectators would be disappointed impelled me to give it a try.

To our good luck, the winds died down absolutely by the time our helicopter came overhead to commence the drop. Flight Lieutenant Thapar from the ground control transmitted the position of the streamer (a piece of cloth that has the descent characteristics of a parachute) that I had dropped to judge the actual winds. The position of the streamer also confirmed gentle winds. It was safe to jump.

It was a clear blue sky and fine weather for a parachute jump but my mind was still clouded by the forecast of very strong winds. So, I decided to err on the positive side. I signalled thumbs up to the jumpers (to jump out) much upwind of the sports ground––where we were to land in front of the spectators––hoping that the winds would help them drift and make it to the target on the ground.

It was a mistake. Jumpers could barely make it to the sports ground––a few landed in the front of the spectators others landed scattered outside the ground. I was the farthest from the landing area. Tall trees welcomed me as I approached mother earth. Despite my best efforts to avoid them, I landed in a big one. My fall through the tree broke several branches before the suspension lines of my parachute got stuck and I was jolted to a stop. It was an uneasy feeling dangling ten feet above the ground.

In the time I took to take stock of the situation, several thoughts flashed past my mind. 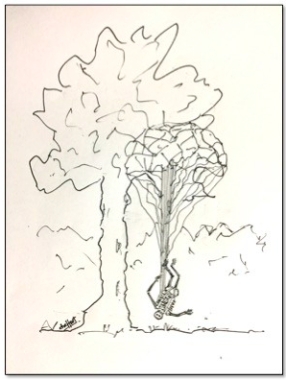 The worst recall was that of the vivid account of a radio operator who had bailed out of a disabled aircraft over the thick forests of Burma during the Second World War. In a similar situation i.e., hanging from a tree, he was attacked by giant red ants. He tried to cut free of his parachute harness by shooting at its webbing with his service weapon. He shot himself with the last bullet when he failed to come out of the situation and the nuisance of the ants became unbearable. His skeleton was found hanging upside down in the parachute harness when the search and rescue team found him several moths later.

It was a silly recall. I was in a much better situation, less than half a kilometre from the ground. People would soon come looking for me. In any case, I did not wait for them. I followed the standard drill: I whipped open my reserve parachute and lowered it to the ground; carefully unfastened my parachute harness and slithered down to safety. Recovering the parachute was an arduous task.

That parachute jump in Goa is one of my most memorable ones for all the wrong reasons.

2 thoughts on “Out of the Blue into the Tree!!”