The turbulence in the wake of the omni-role fighter aircraft Rafale, which India has decided to buy, has become insignificant in comparison to the turbulence generated by the politics surrounding it. The purchase (mind you, not so much, the flying machine itself) has been making headlines every other day. The politics of it has given the opposition parties the nuclear tipped cruise missile to try and tether the government. 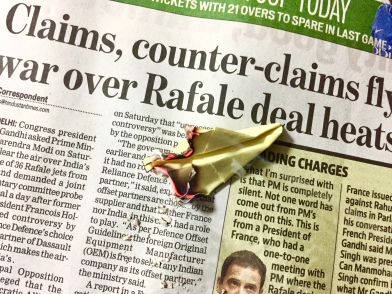 The Brahmastra has been launched. Now, frantic effort is ON to decide as to who or what should be the target. The effort is to ensure that the missile hits a target (anything that could be labelled as a target) before it runs out of propellant. And it must happen before the Lok Sabha elections scheduled next year.

The media is genuinely trying to keep the all-so-innocent junta informed. Effort to improve the TRP is a parallel enterprise. So, any news that informs (read sensationalises) is good. New issues need to replace the old ones.

In the clamour of people and parties accusing each other of motives and intentions, some good meaning media-persons consider it worthwhile to report on the performance characteristics of the aircraft, leaving aside the politics of it for a while. Who better to hear from than the Chief of the Air Staff (CAS), Air Chief Marshal BS Dhanoa? So they try to get the right answer from him.

Few would envy him for being in a position in which people with shallow theoretical knowledge seek comments on issues that are technical, sensitive and of strategic importance. And among the crowd are the smart people who attach meaning to each word the Chief says; and they comment on his body language and timing of the comment too. Now, because “the country wants to know,” (and because it would be inappropriate to keep the people guessing), the Chief confirms that it is a good aircraft that the country is buying to address the dire current defence need. He says so with the conviction of an air warrior who has flown thousands

of hours in fighter aircraft. He is the one who flew solo in a MiG-21 aircraft soon after taking over as the Chief displaying rare and exemplary military leadership!

When he speaks, he is sure of what he is talking about.

Yet on another occasion, they ask him about the aircraft. His answer is the same. A little later, the question is repeated in different ways. The Chief who means business of national defence only, repeats the answer.

Then comes the time to generate new and renewed interest in the Rafale Deal.

At a National Seminar on the IAF’s Force Structure (2035), a media-person recalls the Chief’s statements on the performance of Rafale aircraft and the timing thereof, and suggests if the comments are politically motivated. It was not the Chief who was asked the question but an officer (a retired one in that). The question was not responded to because it was not relevant to the subject and perhaps because it was the prerogative of the Chief to respond.

Any effort to draw the IAF into the political slugfest on Rafale will benefit people: some will be able to settle scores with the government; others might find a way to pass the blame, if any. But if the deal were to be shelved or the procurement were to be deferred, the worst sufferer will be India whose defence preparedness will get compromised.

My Anna Bit: Whichever party comes to power, it will need the Air Force to defend the country’s skies and the frontiers. The Indian Air Force will continue to feel the pressure until the shortfall is made good. We’ll do well to leave the Chief and the Air Force to do their bit.