Patriotism in our country follows a sine curve. Almost. Come Republic Day, come Independence Day, The tricolour surfaces and flutters atop everything moving and non-moving. It can be seen atop buildings and on cars and motorbikes. Forget the debate on the use of flags made of synthetic material, the sales peak around this time. Patriotism also dominates the theme of the songs played on blaring speakers in every street. Television channels vie to screen films with themes patriotic. Film producers, some more patriotic than the others, time the release of their multi-starrers to coincide with the big day.

My childhood memory of those celebrations is simple yet vivid. We kids always remembered the day more for a half day at school without school bags, and the distribution of sweets. The unfurling of the flag, chanting of national anthem, Vande Mataram and some patriotic songs did instil some good feelings, which we could hardly define. But for sure, we used to talk about Shivaji, Maharana Pratap, Bhagat Singh, Chandra Shekhar Azad,… all the year round––not just twice a year.

That was a half century ago. 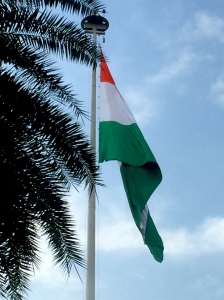 The other day I spent some time with my grand-nephew Lakshya, an intelligent youngster. I was driving him around when we passed a large tricolour atop a sixty odd feet flagpole. I looked at it with reverence and asked Lakshaya, “What thoughts come to your mind when you see our national flag?”

He gave me a blank look and said, “Nothing, really.”

“Doesn’t it remind you of our national heroes? Doesn’t it fill you with love for the country?” I tried nudging him into answering with a stereotype that I had in mind.

But his answer left me speechless. “Nanaji,” he said, “I have so much homework to do. I am left with little time to think about all these issues.”As we drove along, we came across a giant hoarding of Mahatma Gandhi. I dared not ask him who he was. I feared he might say, “Ben Kingsley.”

To be concluded some day…

6 thoughts on “I Love my India”