One of my all time favourite books is Mark Twain’s Adventures of Tom Sawyer. In particular, I remember the part published as a separate story titled Whitewashing the Fence. Briefly, Tom is assigned the job of whitewashing the fence by aunt Polly––something that he does not really like. He starts whitewashing the fence, but ultimately makes the other kids of his neighbourhood do the job for him. He sells the idea that whitewashing is a work of art and not many can do it well. His friends fall for the challenge and come to do it in turns. They even pay him in kind to be able to get a chance at it. He not only gets the job done (he is able to get three coats of whitewash on the fence) by his friends but also makes some gains in the form of the core of an apple, a kite, a dead rat and a string to swing it with, twelve marbles, part of a Jew’s-harp, a piece of blue bottle-glass to look through… the list is very long. Says Mark Twain, “If he (Tom Sawyer) hadn’t run out of whitewash he would have bankrupted every boy in the village.”

“He (Tom) had discovered a great law of human action, without knowing it—namely, that in order to make a man or a boy covet a thing, it is only necessary to make the thing difficult to attain.”

Throwing small challenges, which a kid cannot but accept, is an art. Grandma Rita Jain, a Professor of Botany, seems to have mastered the art well. She has stitched a colourful mat with leftover pieces of cloth that she had. She makes her grandson, Kartik sit on the mat and proposes (that’s her way of challenging the little one), “Kartik, I wonder if you can point at the red squares.”

Kartik feels victorious when he is able, not only to point, but also count the squares of a particular colour. Sitting in Padmasan, the Lotus Posture on the same mat and performing some other actions form a package deal of challenges, which he enjoys accepting.

One trick cannot keep a kid engaged for long. Kartik seeks variety. The other day, the grandma sat by him and started whipping curds with the traditional Indian whipper (Mathani). It was a stratagem. As the grandma had expected, the little one was attracted to it and wanted to do it all by himself. “Dadiji, I want to do it,” he expressed his desire. 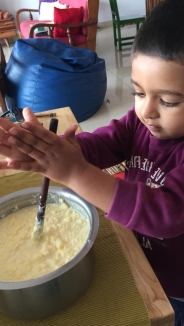 “Beta, it is difficult. Do you think you can really do it?” She made the exercise of whipping the curd sound like a highly technical job.

“I’ll do it slowly. I’ll not spill anything. Let me try at least. Please, Dadiji.” Kartik urged.

“Okay! Go ahead! Let me see how well you do it,” the grandma ratcheted up the challenge.

Kartik did it; and did it well. There was nothing great about it. But that little challenge was a step forward in improving eye-hand coordination. The sense of pride that he had at the end of the exercise, gave him confidence for yet another challenge.

In these games that Kartik and the grandma play, both are winners.

5 thoughts on “Grandma or Tom Sawyer!?”